Check Out This Hypocrite: Derek Small of Wildlife Encounters

So I made mention in my last post that I have more content planned discussing people who present "animal ambassadors" and my problems with them. I just happened to stumble on this person who exemplifies the worst of it, and unfortunately, his stance is not unique among animal exhibitors.

I saw him write this on Facebook, in response to a largely inaccurate map of the legality of kangaroos that was trending on Facebook:

So, we have our standard animal exhibitor nonsense. First, the animals he owns, cares for and lives with are "not pets". It's hard to find exhibitors who don't perpetuate this lie. Small throws around the mostly meaningless terms: "permit", "USDA licensed", "educational", and "ecology center" to make himself sound reputable and distinctive from private owners.

This bugged me enough, but scrolling through his Facebook profile (he's Facebook friends with people who sell exotic pets and even one who has sold an exotic pet to me) and learning about his operation, I really started seeing red. This post on his profile REALLY takes the cake: 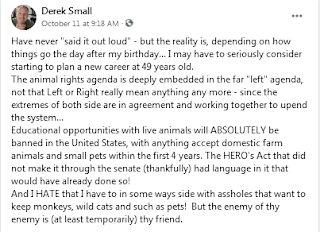 I had so many mixed emotions seeing this.

First, despair. This post was in response to a twitter comment from Kamala Harris who at the time of this writing is on track to taking the second highest position in our government. She touted that she is a co-sponsor of the miserable Big Cat Public Safety Act.

Second, I felt fury. Mr. Small laments that he must "side with the assholes" who want to keep monkeys, wild cats, "and such" as pets. Oh the humanity, poor Mr. Small.

And lastly... vengeful pleasure. Why? Because there's a silver lining to all these inevitable animal bans and regulations. It's that while I'll lose my rights, selfish hypocrites like Small will also suffer and possibly have to end their businesses. This "asshole" won't shed a tear when that happens. No..in fact when I lose my last "exotic" pet I want a front row seat.

Why is Small a hypocrite? I know what he's thinking. He believes that while private owners are just wreckless and unethical, he has a noble reason for owning animals and has special qualifications.

I did some quick research on Small's qualifications, not that I believe you need any to own the creatures he possesses. Small has a B.S. of Education in Exercise Science and a minor in nutrition. He was a fitness director and then a personal trainer. At some point he was in sales at Enterasys Networks/ Cabletron Systems.

With this substantial experience in animal husbandry, he started his path to zoo ownership and animal presentations. At his non-AZA accredited facility (but a member of ZAA and the FCF, pro-pet organizations), which is USDA-licensed and he really wants you to know it (the same professional rank awarded to Joe Exotic), he has "ambassador animals" such as foxes, a coati, reptiles, birds, amphibians, porcupines and of course the kangaroos he mentioned.

There is literally no logical reason anyone can give on why only exhibitors should have animals that have reasonable care. Being USDA-licensed is something literally anyone can get and it just means you get inspected once or twice a year. It exists to regulate animal-owning businesses and is a requirement of such. Controversial zoos like the Cherokee Bear Zoo have the same "Federal license" he brags about.

Small can't even hide behind the excuse that he doesn't support the exotic pet trade and only "rescues" animals. He even admits on his website that some of his animals are "captive-bred in a US-based protected environment" using such specious terms, aka he purchased them from breeders like the rest of us. He has expensive animals that cost thousands like a 3-banded armadillo and brush-tail bettong, which he obviously bought.

The other reason exhibitors believe they are so superior to us private owners is that they are "educational". I am later going to look into the research involving the educational value of animal ambassadors, but for now I can at least say this: even if they do possess some educational value, they are not mandatory or essential for a child's education.

Children can learn about wildlife and conservation without the use of live animals, and exhibitors cannot escape this fact: parading around with exotic animals on leashes, like Small is doing below, will inevitable create "assholes" like myself who want to do the same.

People like me who have a brain will not be too impressed with the claims that these animals make "bad pets" when your ambassador is behaving brilliantly in front of an audience. Most members of your audience, who probably don't want exotic pets anyway, will buy what you're selling, but not us. That will work as well as telling teens to stay from drugs, but what's worse, showing us how fun it is to work with your animals is the equivalent of telling kids not to smoke, and then pulling out a blunt and showing them how great it makes you feel.

People who don't support private pets shouldn't present "animal ambassadors", they should stick to documentaries and stuffed animals. While Little has at least chosen some employees with professional experience teaching science as presenters, he himself is just self-taught, like most gatekeeping exhibitors. He's no more qualified than the rest of us to care for animals.

"we fundamentally disagree with and strongly oppose the efforts by small ideologically-driven segments of society to deprive domestic and wild animals and plants of their reproductive rights – and further oppose their long term agenda of domestic animal extinction and exclusion of animals from human society."

It's amazing to see Little complain about animal rights nuts who want all animals out of captivity but then call people who are no different than him other than not taking animals to presentations "assholes".

What a loony. And speaking of assholes, I found a pathetic presentation on Little's Youtube channel featuring what I'm pretty sure is a live fish being chased, tortured and eaten alive for "education". Like anyone's paying attention to the insipid "facts" while watching the trapped fish swim for its life. This would have caused me significant distress as a child and even as an adult. This "presenter" even cheerfully speaks about a 2 year old toddler getting killed by a large pet snake for anti-pet propaganda. What a callous display of sociopathy and indifference. 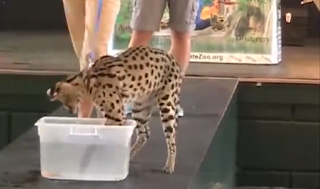 This screen cap is protected under the "Fair Use" doctrine. It is essential for the point I'm making.