Why is Rep. Mike Quigley Lying about the Big Cat Public Safety Act? 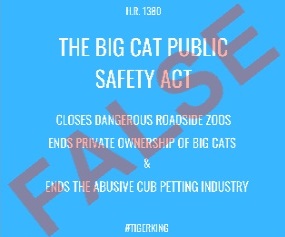 For some awful, inexplicable reason, almost no one, and I'm not exaggerating, seems to understand what the "Tiger King Bill", the Big Cat Public Safety Act (H.R. 1380) entails for animal owners and zoos. On both sides. This includes the bill's own sponsor, Mike Quigley. Either he is exceptionally ignorant to the terms of the bill he is pushing to pass, or he is simply lying to the public about what his bill will actually do. I'm not sure which is worse at this point.

After much research and messaging people about this proposal, I am finally confident that I have a firm grasp of what this bill does and why it is a grave injustice.

This bill bans the non-commercial private ownership of "big cats". This means people who are not USDA-licensed.

This bill includes a requirement for zoos and exhibitors holding big cats to keep people at least 15 feet away from them or the cats must be behind a "structurally sound" barrier. The only people who can come into physical contact with the cats are "trained employees", licensed veterinarians (and vet students), and a limited number of designated visitors under strict circumstances.

What the Bill Won't Do

Close any "zoo" of any kind, "roadside" or otherwise. Why? Every "zoo", which I define as a facility that holds animals to exhibit to the public, is required by law to be USDA-licensed.

Unless a zoo is not in "good standing" with their license (this concept is not defined), they are exempt from the Big Cat Public Safety Act. That means, theoretically, if Joe Exotic was out of prison and operating his zoo, and if he was in "good standing" with his license, this bill would not affect him, other than ending his "pay to play" tiger cub business.

Joe Exotic would still be able to own, breed, sell, and exhibit any big cat. As well as thousands of other so-called roadside zoos.

Why the Bill is Wrong

This bill automatically bans the small number of non-commercial big cat owners from being able to obtain anymore big cats. This has nothing to do with how well the animal is cared for. Some people believe that all private owners are keeping big cats in apartments and tiny backyards. They are wrong.

Just as you wouldn't expect a horse owner to keep a Clydesdale in an apartment, there are many big cat owners who practice commonsense responsible ownership, keeping their animals in spacious and structurally-sound enclosures. These owners often exceed the standards of some owners with USDA-licenses.

No matter how excellent a private non-commercial facility is, the owner cannot be USDA-licensed because they are not conducting a commercial exhibition business.

The USDA does not regulate private "pet owners". Private owners are all subsequently banned from owning big cats and it has nothing to do with their husbandry standards or experience.

A licensed exhibitor could have far inferior husbandry and public safety protocols to a private owner and still be exempted from the Big Cat Public Safety Act.

Good big cat owners who have responsibly owned their animals are punished FOR NO REASON and this is a grave injustice.

Despite the name, this bill has little, if anything, to do with public safety. It enacts no stringent public safety protocols. It requires the public stay 15 feet away from big cats, but the USDA already made it illegal for the public to physically handle big cats older than 12 weeks (and less than 8 weeks). This bill essentially has been drawn to address commercial cub petting. Cub petting, while controversial for animal welfare reasons, was never a public safety issue. Some bites have occurred, but any animal can bite, including dogs and cats.

This bill was drafted to legislate the opinions and ideological views of certain groups, not protect the public.

This bill is designed to allow certain individuals to overstep their boundaries because it extends beyond the fundamental interests of the public and society. The public has a right to be concerned about the presence of dangerous captive animals and whether or not the animals are securely contained by responsible owners. This bill does nothing to address that, and seems to be laying the framework for future mandates that comprise merely the opinions of special interest groups that believe all big cats "belong in the wild".

The bill is also loaded with ill-defined and ambiguous terms, such as the requirement that the USDA license be in "good standing", defining the "public", and numerous others.

The Big Cat Public Safety Act bans non-commercial pet owners from owning big cats and USDA-licensed facilities from letting the public pet big cat cubs. Pet owners can get around this if they sign up to be a "charity" as long as they don't sell, transport and display, breed, or allow the public to come into contact with their animals. Rep. Mike Quigley doesn't understand his own bill or he is lying to the public about what it does for some reason.