Welcome all, to the saga of 2can.tv, a Youtube channel, Instagram, Facebook page, and Discord maintained by a dude named Brock Afentful, owner of a fluctuating number of pet toucans. Before we get started, I wanted to list some of my other posts about this situation, as it would really be to your benefit to take the time to go through all of it. I urge you to keep an open mind however.

If you "read" my material and upon finishing, are still asking yourself just why the heck do I have a problem with Brock, or why I would stand in the way of him "rescuing" toucans, you certainly have not read my content with an open, impartial mind. If you are of the belief that Brock is infallible and that absolutely nothing I say will change your mind, you're wasting your time sending me hate mail and death threats.

The Death of Maeve

Last year I described an apparent mental failing I termed The Parrot Paradox. In short, this is people's tendency to see a pet that is uncommon and unusually owned and perceive that animal as difficult to care for (or jump to the conclusion that it doesn't belong in captivity) often without even knowing anything about that animal. This is a consistent occurrence with parrots (common) vs. toucans (uncommon) and the belief that the latter requires specialized care or should only be in zoos, even when parrots are considered to be high-maintenance pets [5].

To expand upon this cognitive bias, I would like to introduce you to the "Three Can'ts" (because they all say you can't care for a toucan properly, so to speak). These are three individuals who post a lot of online content about their pet toucans, therefore, their information is favored by Google and Youtube algorithms. All three have the following in common: They've owned toucans as pets, they all believe toucans shouldn't be pets, and they are all relatively young, have no education in the sciences, and had their first toucan(s) for 6 years and under before giving them up or having them prematurely die (generally longevity in captivity is 21 years [25]).

They are Brock Afentful of 2CAN TV, Jamieleigh Womach of Bird Tricks, and Chrissann Nickel of the blog Adventures in Toucanland.

I will discuss the other two in more detail in future posts, but while Womach and Nickel impulsively purchased their toucans, Brock may be the least qualified to be making public statements on the suitability of toucans as pets for many reasons.

To start, this is the video that inspired this post:

In this video, Afentful makes some comments that show an appalling lack of self-awareness and obvious hypocrisy which is evident from the title alone (Tiger King, Exploiting Animals for Fame, & Why Toucans Shouldn't be Bets!(Rant). 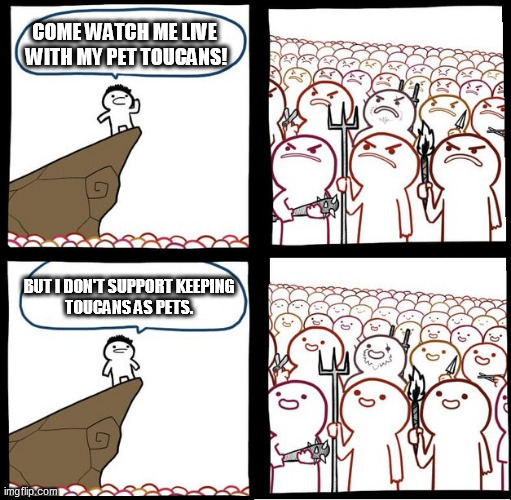 He also says: "I don't believe toucans, or any exotic animals, should be pets. But they are here to stay and we can't change that now. The best thing we can do is make sure they get to qualified people or facilities that give them the best lives possible." and on another video "I do NOT recommend or endorse Toucan's as pets."

Therefore, Brock Afentful is, by every definition, exploiting his birds, as they help pay his bills, and yes, his earnings also pay for the care of the birds, which is also to his benefit, because they are his desired, extremely expensive, luxury pets. One only needs to glance beneath the "rant" video in question, where he is ironically begging for donations and selling products depicting his pets. 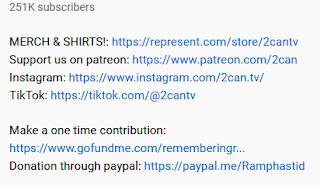 
Why is Afentful asking for donations? The fact remains, either he can afford the care of his birds that he asked his supporters to help him buy and simply would rather have someone else do it, or he can't afford their care yet "rescued" two toucans after he spent what would be more than a month's income for much of America's population on the first toucan.

Furthermore, his house is filled with what appears to be expensive mainstream film memorabilia, including this model of a Jurassic Park T-rex that retails for over $500 in the U.S. at the time of its release.

This is important, as Afentful presents his channel as an educational resource and perhaps even a toucan "rescue". It should be noted that there are real bird rescues that utilize their limited resources to help as many lower value birds as possible, while Afentful is collecting money for three valuable (even if they are sick) animals that he owns completely for pleasure (his words: “I can’t imagine living my life without a toucan”) when he supposedly thinks that is wrong. He even claims that he does this "for a living".


Ironically, by the standards of most toucan keepers, Brock Afentful's enclosures are way too small for large toucans, including one of the most well-known breeders, Emerald Forest, and even they don't believe toucans shouldn't be pets. Most owners of large toucans believe they should ideally be housed in walk-in avaries. Here are cage specifications from three resources:

This was Ripley, his first toucan's cage, this is Toupac's cage, and this is the cage for the 2 new birds he "rescued" (at 14:00), which appears to be the same model (or is it the same cage?) of Toupac's double macaw-sized cage (possibly 80"x40"x61" interior), but split in half to accommodate the two birds (it is unclear if this housing situation is permanent, and if it is, this is a very stressful situation as the two birds do not get along and have no means of hiding from each other's view).
However, he claims 2 of the birds are rarely in the cage. 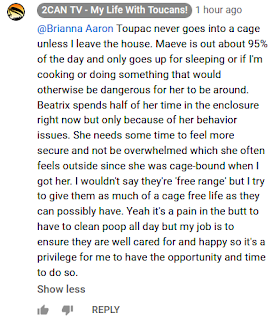 But there's a few problems with this.


None of Brock Afentful's followers seem to make anything of the fact that he at least once has fed all of his toucans fried chick-fil-a nuggets and Froot Loops. He does this possibly to amuse people, not for "education" and certainly not for the benefit of the birds. While Afentful often states to his followers that toucans like to eat meat, they rarely do this except when raising chicks [3][13][14][20][22][24][25].

The diet should be as low in iron as possible [4][7][10][11][22]. Animal protein is high in iron [18] and toucan owners know to avoid meat entirely if they aren't breeding [7][8][10][19][22][24]. However, the Chick-fil-a nuggets are not just meat, but fried and cooked with various spices of unknown suitability for birds. Foot loops are extremely high in sugar, even for humans. Feeding these foods one time (if it was only one time) might not be harmful, but why take the risk with delicate animals like toucans just to get views? This is not only "exploitation", but potentially harmful exploitation.

Furthermore, Afentful's first toucan was fed cooked turkey shortly before her death at 6 years old. Her cause of death was cryptically described as "heart failure" or a "dormant heart issue", which he tries to imply was a genetic issue. Toucans are prone to cardivascular problems, and one cause is a high-fat diet and obesity [2].

Lying about Toucans being Injurious


Part of Afentful's spiel about toucans making bad pets involved him making a click bait thumbnail about toucans biting and inserting fake blood splatter on top of the image. He seems to rather enjoy presenting toucans as 'raptor-like' perhaps to make himself feel like a daring animal wrangler.

Actually, toucans may have the least injurious bite of any comparably-sized warm-blooded animal that you can possibly own. Their beaks are very lightweight [23]. After prompting his toucan who has "behavior problems" to bite him, he sustained a superficial red spot on his finger, which proves this. Parrots, on the other hand, can break your fingers [9], but I haven't heard him suggest parrots are bad pets. This is just another great example of the aforementioned paradox. Not many pet owners would induce a bite from an animal that could cause significant harm. If I prompted some of the animals I own to bite me, I would easily end up in the hospital.


Afentful suggests Beatrix, the keel-billed toucan, has "behavior problems" and is "not pet quality" despite the fact that she is an adult bird in a new environment being forcibly housed closely to other strange toucans of different species, which is not recommended [4]. I believe her behavior is completely normal and expected, which only further proves my point: Afentful seems to have expectations of birds behaving like tame dogs and when they do not, he considers them to be bad pets. This is entirely the root of exotic pet criticism, i.e. comparison syndrome. People who have incorrect perceptions of animals will label them incorrectly. The fact that his other "rescue" toucan is behaving so well (even before his supposed ample time working with them) is great evidence they make excellent pets for the right owners.


Brock Afentful frequently states throughout his Youtube channel that he doesn't believe toucans (and other exotic animals) should be pets while he purchases the birds, actively supporting the trade and making money from showing them of. Therefore they are not rescues, they are assets. While suggesting that only a limited number of people, himself included, have what it takes to care for toucans, his husbandry is questionable and does not follow the recommendations of leading toucan breeders. Afentful appears to make up his own rules regarding not just toucan care, but who is qualified to own them and nonsensical logic that permits him to "rescue" and even purchase toucans while simultaneously siding with animal rights activists so that he can get praised by pro and anti-exotic pet minded supporters, reaping every benefit.

*If any of the information presented here is factually incorrect, please let me know with sources provided.