Adrienne Kruzer RVT, LVT, who is currently a "Senior Veterinary Product Technical Specialist" in Lancaster, South Carolina, who writes for the Spruce Pets and various other websites, claims to be an expert in "domestic and exotic animal care", however it is apparent that she just re-writes other people's articles, including some of my own, to create a large quantity of inferior content solely for revenue.

Here is an example of a section from an article that is almost entirely taken from one of my well-researched articles on pet foxes:

Adrienne Kruzer: The arctic fox (Vulpes lagopus) is very similar to the red fox but is typically smaller and not as commonly kept as a pet. An animal that has adapted to life in the Arctic, it is sensitive to hot temperatures and may overheat easier than other foxes. Measures to keep it cool may be necessary. Due to a small breeding stock in the U.S., Arctic foxes are overbred and some possess genetic problems.
Like red foxes, its urine and scenting glands make it a smelly choice for a pet. It is not well suited to life indoors since it scent marks its territory. It also loves to play in sand and dirt and may make their litter box more of a pleasure sandbox than a bathroom spot. As far as foxes go, it can have a pleasant disposition.

From my article (which includes references):  Availability: Regular availability but less common and more expensive than red foxes.

Relative Care Level: As the name might suggest, this species can be sensitive to hot temperatures and overheat. Measures must be taken to keep them cool in unsuitable climates. Being a 'true fox', special smelly scent glands can make them poor indoor pets, although other owners report that they have no smell [24]. Due to a small breeding stock in the U.S., arctic foxes are over-bred and some possess genetic problems [13].

Arctic foxes can have a pleasant temperament (for a fox), some learn to use their litter box 'most' of the time, and they have very smelly urine. They love to play in sand or dirt and they may mark their territory with urine or feces [10].
Cost: $200-700 for captive-bred animal.


Not only is this frustrating for writers like myself, who spend a lot of time scouring scholarly sources, pet owner forums, and using our long term interest in the subjects that we write about to aid in the development of unique online articles that provide quality material for readers, but this is also important considering Kruzer is one of many online writers with "expertise" that spread misinformation about exotic pets, claiming they make "bad pets" based on their obvious ignorance.

For instance, here is Kruzer's article on why owls make bad pets. It is clear that she has inadequately researched this topic as the information provided is extremely shallow. When describing the enclosure an owl needs, she describes it as a "substantial aviary setting" that must be made out of "sturdy wire". This is just generic information from someone who's done the most minimal amount of Googling. Here is one of my articles about pet owls with much more specific information on owl housing:


"Owls and other birds of prey are kept in what’s called a mew. These are essentially completely enclosed, large, outdoor, wooden enclosures. The sides should be composed of slats that allow in some light and air but are not too far spaced apart as to cause discomfort to the animal and potentially be accessible to outdoor animals."

It is clear that she doesn't even own exotic pets except for "two rescued leopard geckos" and her experience likely involves having been in the same room with exotic animals occasionally as a vet tech, if her content is any indication. Her lack of "expertise" is apparent to anyone who is passionate about exotic pets in captivity. Kruzer's Linkedin describes her writing: 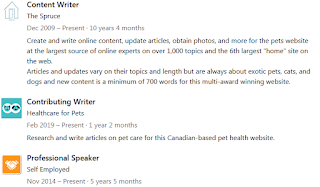 I contacted Kruzer privately on Facebook about this issue in a respectful manner weeks ago and was just immediately blocked. I also contacted the "multi-award winning website", The Spruce, twice and was completely ignored.  This website, which was launched by About.com, claims they have the best experts in their topics and are conflict-free:

"The Spruce brand is one of the top 10 largest lifestyle properties online according to comScore, a leading Internet measurement company. Our 45+ expert writers, including professional contractors, landscapers, chefs, cookbook authors, registered vet technicians, and well known crafting bloggers, have extensive backgrounds and expertise in their topics."

All of our writers were carefully chosen for their extensive experience in their subject areas."

"At The Spruce, we take great pride in the quality of our content. Our writers create original, accurate, engaging content that is free of ethical concerns or conflicts. If you ever come across an article that you think needs to be improved, please reach out by emailing contact@thespruce.com."


This illustrates why it is so important to ignore content farms like The Spruce Pets and authors like Adrienne Kruzer who have the gall to tell people an animal makes a bad pet or shouldn't be a pet when they are not properly educated on the topic and are mostly writing such to gain traffic and revenue.
Posted by Melissa at 5:25 AM