Exotic pets may seem appealing…because they are. Having a unique pet is sometimes worth enduring the smell, the difficulty, and the minuscule danger. 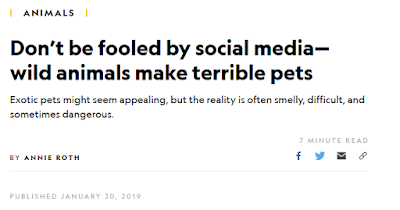 “WOULD YOU LIKE to have a red panda as a pet?”


This National Geographic article declares. And my answer is yes, yes I would. They seem like fascinating animals. But I can’t. No one in the United States has a red panda as a pet, nor am I aware of anyone in the world who does.

Yet this dumb article seems to believe that red panda pet keepers are a real threat. It casually discusses why they make bad pets alongside animals that are actually feasible to own such as sloths, capybaras, fennec foxes, lemurs, and even sugar gliders.

Inevitably, it also discusses slow lorises, animals that actually are threatened by the pet trade but are not kept in the Western World. People who are obviously ignorant to how the pet trade works in the United States frequently seem to think that any animal is obtainable, and their ignorance shows why they shouldn’t be shaming people from owning certain pets when they know nothing about this topic.

The author’s reasoning for discouraging keeping sugar gliders as pets, for instance, while acknowledging that they are popular and extensively captive-bred, seems to amount to their nails being long. That’s literally it.

Thane Maynard of the Cincinnati Zoo has a peculiar reason for thinking the unobtainable red pandas are bad pets.

“They have cat-like claws that would tear up your furniture and maybe even you.


Well Thane, if you’re trying to tell people that something is a bad pet, you probably shouldn’t say that the animal has claws just like the domesticated pets you are pushing them to get instead. Many of these same problems exist with cats, dogs, and ferrets.

The rest of the article’s claims just amount to generalizations of ‘bad’ things associated with each animal—sloths apparently suffer psychological distress when being touched (even some AZA zoos use them as ‘ambassadors’, so being a personal pet would pale in comparison), fennec foxes are smelly and messy, capybaras are social and ‘might’ bite, tigers are deadly, prairie dogs can’t dig in wire cages, lemurs can attack you, and otters are aggressive.

Such a broad spectrum of animals are being lumped together based on their exotic-ness, even though they differ from each other significantly. Some are completely unobtainable so there’s no reason to discuss them, others are a little more inconvenient than the typical house cat to keep as a pet, and one can definitely kill you.

I think we all know that all animals have ‘bad’ qualities as pets. Cats can spray and have stinky urine, some dogs can be plenty destructive, and ferrets (unless this is too exotic for National Geographic) have lingering odors. Domesticated rabbits are prevented from digging too.

So again, I’m not sure why these authors feel that something shouldn’t be a pet simply because there are negative traits with owning them, like there are for all pets.

With the exception of the tiger and those animals that are removed from the wild through non-sustainable methods, these exotic animals appear to be just like any other—only suited for those who do their research and are fine with their attributes.
Posted by Melissa at 10:26 AM