Dear Dog and Cat Owners, No One Is Safe

Earlier this month I got into it with an animal rights nut claiming to be a veterinarian (no longer practicing) named ‘Karen’ in a Facebook group over a New York Times article. The topic was about elephant captivity being so formidably terrible that the animals were probably better off being poached in Africa (I kid you not).

After I got fed up with the constant appeal to animal rights ideology of this particular group, this person made some determination by looking at my profile that I couldn’t possibly understand why animals deserve rights, probably because there are pets on my page (gasp). As I called out the presence of pet dogs on her page, she proclaimed that she is against keeping all pets, her animals were rescues, and that once they die she won’t get anymore.

She must have regretted exposing such extremism because when I went back recently to screen cap those comments, they were all deleted and her Facebook profile was hidden (I pulled this comment out of my email). 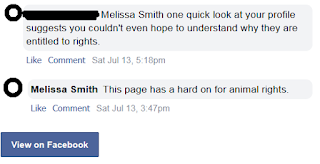 Not too long after that encounter, this nice little gem of an article, not the first of its kind, began trending on the ‘Pocket’ recommendations on FireFox’s homepage.

‘Should We Stop Keeping Pets’?

Ohh boy, it never stops. I thought I was joking when I wrote this but it has become a reality.

Despite the implications, it was refreshing to see an article that for once, fairly included all pets in its examination instead of arbitrarily choosing certain exotic pets that the author just happens to think are strange and therefore unnecessary and wrong for someone to own.

I also hope this article will give other pet owners some perspective before they embrace a movement that they think doesn’t view them as sinners.

It’s easy to be stand up against something when it doesn’t involve your life. While exotic pet owners face incessant local, statewide, and Federal bans for one pet causing a minor injury or even for no reason at all, you’ll see dog owners get livid over bans that target a breed they like in response to the 10th human death in the past 3 months, or cat owners lose it over the idea that they should be forced to keep their pets on their own property.

They are clearly overly comfortable with their favorable position in society. This Pocket article suggests they shouldn’t be.

“At the same time, research is revealing that the emotional lives of animals, even relatively “simple” animals such as goldfish, are far more complex and rich than we once thought…the logical consequence is that the more we attribute them with these characteristics, the less right we have to control every single aspect of their lives”


says Hal Herzog, professor of psychology at Carolina University and founder of the “budding field” of ‘anthrozoology’ (this is the name of the Facebook page where I found my friend Karen. It seems to be a front for discussing animal rights ‘scientifically’).

“Does this mean that, in 50 years or 100 years, we won’t have pets? Institutions that exploit animals, such as the circus, are shutting down –…”

It discusses the legal status of animals and some of the ridiculous changes the law has made in attempts to not see animals are ‘property’. I hope animal lovers who are also pet lovers can now see why these changes are so damaging.

Herzog, the nut and Class A moron whose opinions this article is engaging, is also a vegan, has convinced his girlfriend to go vegan, and actually released his pet bird in a shocking act of animal cruelty as well as environmental meddling but has no problem admitting to it.

“‘I knew she wouldn’t survive, that she probably starved. I guess I was doing it more for myself than for her.’”

The other two anti-pet simpletons mentioned in the article have pets.

“Although Pierce and Francione agree that pet ownership is wrong, both of them have pets: Pierce has two dogs and a cat; Francione has six rescue dogs, whom he considers “refugees”


I need to once again emphasize that it is very common for pet owners themselves to spread anti-pet ideology, just like my friend Karen. This shows the extent of the damage and the lunacy of the type of thinking that involves using dumb reasons or words to excuse yourself from the supposed ‘cruelty’ (Francione calling her pets “refugees”).

While the article claims there is ‘research casting doubt on the ethics of pet-keeping’, it cites only one ‘study’ to support this, an opinion piece called ‘Dogs are People Too’ by Gregory Burns.

In the article, a researcher who is training dogs to hold still for MRI scans makes the shocking discovery that dogs feel positive emotions, and therefore they must have comparable sentience to a human child and we need to ‘re-think how we treat dogs’.

The idea that there are still researchers out there discovering that dogs actually feel as though this is new information paints a devastating picture of the state of the scientific community. Even more, that once these ‘new discoveries' are made, we must change how we do things. This shows how animal rights nuts manipulate science to claim there is ‘new research’ that demands we need to stop keeping pets, as they re-invent ways to say things we already know, like animals being conscious and being capable of suffering.

These days, as I referred to on Facebook, nothing seems to excite people more than the idea that we need to start giving up animal-related activities that bring us pleasure or give our lives meaning. It can start with something completely reasonable, like making laws that promote the humane treatment of pets and livestock, but that ultimately will be challenged by activists to not be enough (vegans often vehemently attack any form of 'humane' farming), until complete ‘animal liberation’ is granted.

It will get to the point that it will be wrong for us to ‘decide’ anything for animals, even when it comes to saving elephants from culls, or keeping stranded cetaceans in captivity.

Activists are so intoxicated by the idea of animals ‘choosing’ things for themselves that they want them to ‘choose’ death, but they don’t seem to realize that if an animal actually had an understanding of what they stood to lose and gain, and actually decided to be in captivity, animal rights nuts will decide for them that they can’t have this, either.

They lose either way.