The Character of John Hargrove | Beneath His Surface

When I heard about John Hargrove’s book last year I couldn’t help but feel he was beating a dead horse. SeaWorld was and currently still is dealing with a hurricane of thoughtless criticism by people—most who are new to animal welfare/rights debates and seem to only direct their attention and vitriol to trendy ‘glamour beasts’ over other forms of common animal exploitation.

In light of Hargrove’s book release, SeaWorld released a video calling the former trainer’s character into question. It absolutely doesn’t have anything to do with the veracity of Hargrove’s statements or affect the substantive issues at play with killer whale captivity, and my feelings about him are separate from the debate, but it does provide some insight into the type of person Hargrove might be.

I honestly was affected little by the video (even as a Black person). Without it, I always had a low opinion of Hargrove, and it has nothing to do with him not being on my ‘side’. There are some people who share some of my beliefs about pet ownership freedom whom I absolutely despise, and I respect the character of Naomi A. Rose, Ingrid Visser, and other vocal opponents of cetacean captivity. I don’t question the moral compass of bloggers like Freedom for Orcas and Cetacean Inspiration at all. But I can’t stand Hargrove. Here’s why.

The first highlighted quote by Hargrove really irritated me.


“I am counting down the hours because I really want to get nominated, just for those whales, just for their voice,” the former SeaWorld trainer tells TheWrap “And SeaWorld, you’re really f–ked”

Why was Hargrove saying he wanted to get nominated, when it is not his movie [but a movie he simply just appeared in]? And even if he were the director, I would find that comment rather conceited, even if it’s under the guise of helping animals.

Both Hargrove and I were active in the comment section. After Blackfish didn’t get nominated at the Oscars (I admit, that was a very, very good day for me), Hargrove revealed more of his colors. 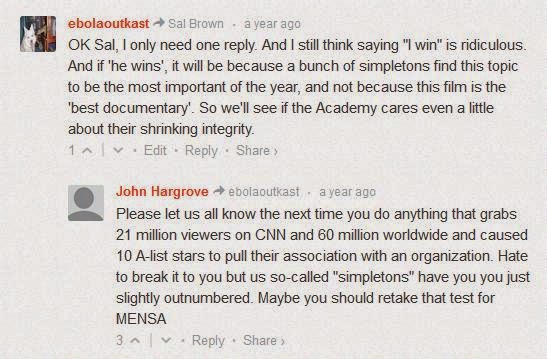 I couldn’t help but feel that again, this comment illustrates a fame/accomplishment-obsession over a positive goal for animals. Apparently, the goal of motivating A-listers to dissociate themselves from “an organization” is what I needed to do to ‘win’ the argument or value as a person in the eyes of the public (whatever he meant).

A statement about the nature of the cause is unsurprisingly absent (i.e., I would expect a response like “let me know when you make a major positive difference in an animal’s life" from someone 100% motivated by passion for animal welfare).

This might not be definitive evidence, but in my eyes, he is attention-hungry, and is jumping into the SeaWorld hate bandwagon at the height of its trendiness for instant praise, financial gain, and adoration.

All of the comments, including mine and his, can be found here.

Regardless of all that, I have to say something about the animal advocates that are defending Hargrove’s stupid, drunken spiel and constant use of the word n*gger.

It is perfectly OK to call Hargrove out on his ridiculous actions and still be against SeaWorld’s choice of livestock. In other words, I find it pretty egregious that people are downplaying what clearly appears to be a typically uttered word in Hargrove’s vocabulary despite his inebriation.

Again, while that alone has nothing to do with the integrity of his statements (and for the reasons stated above, I personally find them highly suspect), advocates should be ashamed of his actions in that video. But their reactions are pretty predictable.

Some have attempted to shame the bookstore that cancelled Hargrove’s book signing.

People should respect their decision. Instead, they’ve stamped their feet and were outraged. It’s a perfect illustration of what happens when zealot-like activists don’t get their way.

Despite making huge strides in manipulating the general public, one bookstore cancellation incites rage, even though the owner stated:

Hargrove still has plenty of other book signings and undeserved exposure, he and his rabid followers can shake off this one defiant literature venue and get back to writing reviews against books they haven't read and toys they've never ordered.

There are also plenty of other less overtly conflicted people who hate SeaWorld, so they should have little to worry about.

So, given that Hargrove has questionable character, I would take some of his more extreme statements, such as “My phones have been tapped and I've been followed.” with a piece of Kosher salt.
Posted by Melissa at 11:28 PM