Due to a recent coincidental real-life experience with a service dog owner and an encounter with service dog owners on a Facebook group (which I was added to many years ago) the following day, I’ve decided to document the following. While probably (or hopefully) most service dog handlers are perfectly nice and reasonable people, some particularly angry and hateful individuals congregate on various Facebook groups and other forms of social media to express their disdain for “rude” people who bother them in public.

What is the appalling, rude, behavior that has some service dog handlers throwing their hands up?

No exaggeration: People pointing and saying “look, a dog!” 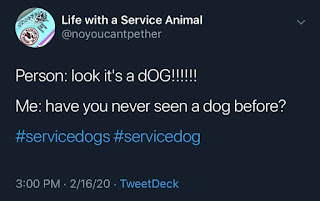 On the page The TRUTH About Service Dogs, this was described as the behavior of an asshole, and several members discussed real life instances where they mocked, insulted, and embarrassed the ‘offenders’. While these individuals often believe that dog pointers are “butt hurt”, “entitled” and overly sensitive, I was called an asshole, banned and had my comments removed for the following replies: 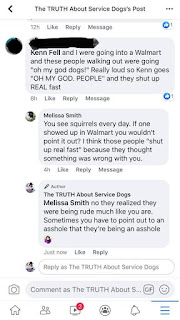 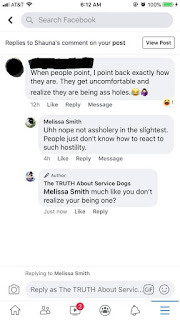 I think I stated an obvious and irrefutable fact (that they apparently couldn't rebut, so opted to silence and denigrate me instead); There are many animals that we see every day that would surprise and grab immediate interest if we saw them inside a building or up close (someone actually said they see squirrels less often than service dog handlers...where??). Actually, probably every animal except the smallest insects would do so.
Furthermore, as I replied, the people these handlers 'shut up' by mocking them weren't realizing how rude their actions were, they were probably taken aback by how someone could respond so nastily to such an innocent action.

I recall an instance where my dog had inadvertently used the bathroom on the edge of someone's lawn. As I was preparing to bag up the waste, a woman rushed out the door and said "I hope you PLAN on picking that up!". I was completely speechless and wondered if they were just playing around and joking. Ever since that incident, I had always wished that my shock (and social anxiety) didn't stop me from responding to their rudeness properly. I am also a person who, when I have a bad day and lash out at an innocent person, feel like shit about it later. The comments in this group, however, celebrate their belief that they've humiliated someone in public. It begs the question, do these individuals have a moral conscious? This is how they justify such behavior:

So apparently, someone pointing at and commenting on the presence of a dog makes its handler feel like a second class citizen and a sideshow act. I can't say that when people notice my non-service dog that I've ever felt even close to this. I would go as far to say that some people think they are being nice by addressing your dog, as regular dog owners often enjoy the attention. There are many who may not even realize the animal is a service dog, nor would they have understanding that the handlers receive these comments too often.

As someone who had a friend who is a dog lover and one of the nicest people you could meet dismissed by a handler the previous day, I can assure all handlers that being rude is lights years from their intentions. Some people just really like dogs; they will even notice a particular cute dog in a pet store where they are surrounded by dogs, while walking their own dog. I can't imagine being so myopic as to not be able to understand this. Service dog handlers want people to understand their plight and subsequently change their behavior, so perhaps disrespecting non-handlers isn't the best way to accomplish that, as respect is not a one way street.