Here is further proof that when you deal with anti-pet/zoo/captivity ‘sanctuaries’ such as Big Cat Rescue in Tampa and the Sandstone, Minnesota-based Wildcat Sanctuary, you will be faceing logical fallacies, deceit, and shameless hypocrisy.

This particular rescue popped on my radar this week when I viewed this insidiously stupid post of theirs: 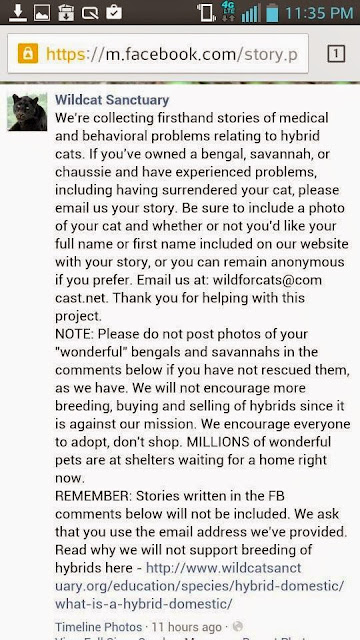 Seriously? So the writer of this post is actually collecting stories of  “medical and behavioral problems”  involving hybrid cats—and here’s the kicker—they are outright rejecting successful stories of happily owned hybrids by declaring that no one post any photos of them.

What is it called when one only seeks facts to support their ingrained, unchangeable, and often erroneous belief?

One of the most commonly employed logical fallacies of the anti-exotic nutters.

Here, this biased attitude is illustrated with little awareness of its blatancy, appearing almost ironic and humorous. But it is not intentional satire, it’s real, and that makes it thoroughly depressing.

What’s worse, out of all the controversies of the exotic pet trade, hybrids have got to be the most ridiculous pet to complain about because they are essentially (and this definitely applies to Bengals) domesticated cats.

Bengals are the same size as non-hybrids and are pretty much the same animal with more ‘dog-like’ activity.

Of course they can have “behavioral problems”, as do many dogs and cats. If I were an idiot, I would run around collecting those stories so I could announce to the world that dogs and cats make bad pets and are suffering in the pet trade.


Believe it or not, this is not the only disgraceful element of this ‘sanctuary’ I’ve witnessed this week.


On May 14th, the private sanctuary celebrated the birthdays of their twin one year old white tigers.

What the hell is a ‘sanctuary’ doing with baby animals?

As many should know, babies are not in need of homes unlike the displaced adults. Cute baby tigers are in high demand. Sanctuaries exist to provide homes with their limited space for those animals that need it the very most. Just where exactly were these cubs ‘rescued’ from?

Why, it was the AZA-accredited Michigan City Zoo! What’s extra amusing is that you cannot find this information anywhere on the news reports or on the sanctuary’s website; I discovered this in the exotic animal circles on Facebook. Here is the origin of the animals.


And guess what else? WHAT. WHAT. WHAT?? They are asking for donations!

The Wildcat Sanctuary has a “Wild Space” fundraising campaign to raise funds for an in-ground, tiger-sized pool for these two, as well as the big trees and high perches they’ll love.  Since this will be their home for the next 20+ years, they’ll need plenty of room to roam to live wild at heart the rest of their days at The Wildcat Sanctuary.”


ARE YOU KIDDING ME?
Either they are lying, or they seriously don’t have the means to care for the animals that they did NOT rescue, which is the mark of a terrible owner. You do NOT acquire animals if you do not have the funds to house them when they get older, hoping to ‘cross that bridge when you come to it’ by begging for other people’s money.
That is despicable.
No wonder the Wildcat Sanctuary can’t get their facts straight. They probably assume all exotic pet owners are as irresponsible and pathetic as them.
Posted by Melissa at 2:03 AM