You Should Only Keep Domesticated Animals Because They Can’t Survive in the Wild!

One of the most infuriating criticisms regarding my ownership of natural state animals is this notion that I am somehow being cruel because my pets are healthy and physically fit.

OK, no one uses those exact words, but when it boils down to it, this is essentially being claimed to those who can’t think beyond the domestication myth dogma. You’ve probably heard this many times if you participate in the exotic pet debate; because exotic pets can allegedly survive in the wild and domesticated animals cannot, it is cruel to force exotic animals to be pets and OK for ‘domesticated’ pets.

This idea is so unfathomably stupid because, without even getting into the ethical crux of selectively breeding animals to not be able to survive in the ‘wild’ and what that entails, it is just completely untrue.

So many domesticated animals not only survive, but flourish in the wild, by evolutionary fitness standards
anyway.

It might not be a paradise out there for feral cats, but they produce numerous viable offspring, and that’s all it takes for a species to do well; it doesn’t matter if most will succumb to an untimely death at 3 years old, nature doesn’t promote animal well-being, just survival.

There are also feral populations of swine, rock doves, horses, dogs, and minks. So, this idea of domesticated animals being unable to persevere in the wild is pure hooey.

Also, just because an animal is natural state doesn’t mean that it can survive outside either. When most exotic pets are human-imprinted, or hand-raised, they do not have the skills to survive in the wild. Setting them free would be akin to tossing a human couch potato into the jungles of Borneo. Most freed or escaped exotic pets die, even if the climate is to their liking.


If anything, domesticated pets are better survivors because humans tend to pick adaptable species as the best domestication candidates. This is why the domestic cat has spread like a cancer throughout North America and isolated islands, also breeding and hybridizing with their progenitors to cause that undomesticated species to become threatened in some regions.

Now, what’s this idea about it only being ethical to own animals that can’t survive without us? As I’ve just explained, many domesticated animals can adapt to life in the ‘wild’, depending on the ‘wild’, but those that do must possess adequate physical health and the ability to find food to do so. 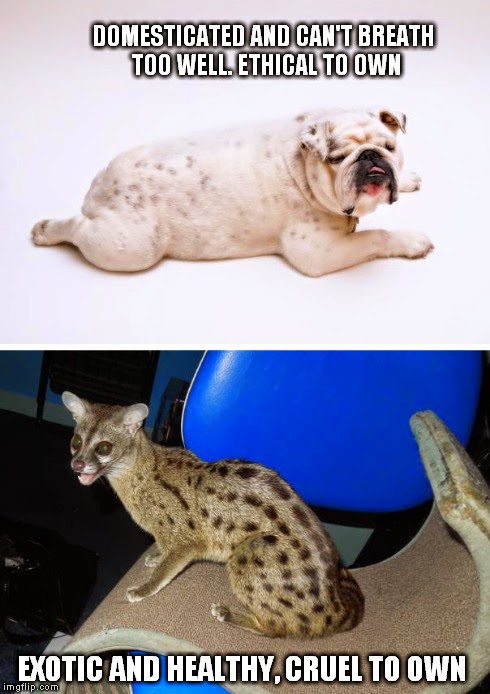 The most obvious example is the bulldog, making the top 10 list of America’s favorite breeds annually, it cannot even mate without human assistance. It is riddled with health problems and horrendous jaw structure.

But that’s OK because it’s supposed to be that way, the same anti-logic exercised when I’m told my exotic pets are ‘supposed’ to be in the wild because, y’know, that's what I was raised to accept seeing.

So we know that bulldogs, pugs, and numerous other popular dog breeds would never make it on their own so it’s fine and dandy for us to own them. They are ‘domesticated’ in a way that debilitates them, so they need us. My spotted genet can breathe through his nose and run like the wind, so he ‘belongs’ in the wild where he can enjoy evading  predators until his premature death.

This way of thinking comforts people. A place for everything and everything in its place. No brains required, just accept it.


What’s often overlooked is that WE are responsible for how these dogs and other animals turn out so their fate is in our hands. I’ve decided that it is far more ethical for me to own my exotics than to intentionally incapacitate Canis familiaris or any other species. That’s how I see things. I detest many forms of dog breeding but have no plans on trying to enforce laws that will cause people to lose their ability to own the pets of their choice.

Why can’t people afford me the same consideration?
Posted by Melissa at 5:27 PM