To the Sanctuary Holding Darwin the ‘Ikea Monkey’: Pay Your Own Bills 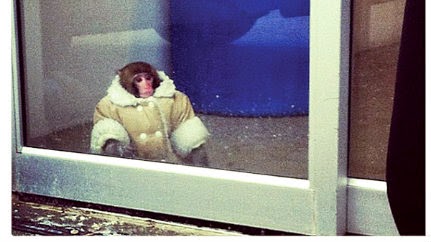 True animal sanctuaries are an extremely important resource. They provide adequate homes for unwanted animals that have little or no options left. Such facilities might be even more important for exotic animals, particularly those with heavy special needs like primates. The Story Book Farm Primate Sanctuary, run by Sherri Delaney, claims to be such a facility, but their heavy exploitation of one of their residents suggests otherwise.

Darwin the ‘Ikea monkey’, found and confiscated in the parking lot of the famous Swedish furniture-selling franchise has an owner, or at least he did, until various unjust laws led to his abduction. Darwin’s real owner is Yasmin Nakhuda, a lawyer residing in Ontario who made the mistake of obtaining the animal in a location where it isn’t legal and not properly securing Darwin in her vehicle, since he somehow was able to escape a crate and locked car. A fine would be a sufficient punishment for these actions and she should have had her pet returned to her if she was willing to move to a location where it is legal (as far as I know she has or is willing).

Sporting a tiny sheepskin coat, Darwin the Japanese macaque became an instant internet sensation, but a deeper tragedy was also in progress. Nakhuda claims she was coerced into signing the animal over to the authorities for fear of not seeing him again (not farfetched, as authorities are rarely accommodating or fair to owners of monkeys) and that Toronto Animal Services never had the legal right to refuse to give the animal back in the first place.
While monkeys are a high-maintenance pet that require a dedicated owner, first time monkey owner Nakhuda has at least demonstrated extreme perseverance in her failed battle for custody of Darwin, pouring a quarter of million dollars in legal fees into the case and enduring the emotional struggle. We have little reason to judge the quality of Nakhuda’s care and she is at least entitled to ownership of what she originally owned until the situation is deemed unsuitable (such as the case of Rocky the bobcat) or if she gives the animal up on her own volition.

What’s worse, the sanctuary that nabbed the famous monkey was adamant in encouraging officials to not let Nakhuda have custody (they were defendants in the case) with mostly failed arguments about how wild animals do not belong in captivity because they are nothing like so-called domesticated animals. It is increasingly common for philosophical agendas stemming from the misguided animal rights mentality to interfere with basic pet ownership rights in law.

Here’s where it gets especially upsetting.

After losing the case, Nakhuda was ordered to pay $83,000 in legal fees to the primate sanctuary, to add insult to injury. Story Book Farm, in addition to defeating Darwin’s owner, is now milking every financial drop from his fame. Now, due to “personal problems” between the owners, they are selling their sanctuary’s property and are re-locating. Their campaign, manipulatedly entitled ‘Darwin’s Dream’, is asking the public to just hand over $490,000 for a down payment on an extravagantly large animal ranch, the former Northwood Zoo in Seagrave, that clocks in at around 56 sprawling acres (22 hectares) and even has 21 additional monkeys living on the property.


“Due to a change in our human family situation, the sanctuary needs to relocate by spring of 2015. Our proposed new home has 56 acres of rolling hills with trees aplenty and ample space, with indoor and outdoor areas for all our residents. There are 2 houses on site for staff as well as a finished area perfect for a vet clinic on site. There are also twenty additional monkeys already living on the property that will be given sanctuary and likely integrated into social groups.“

Darwin’s s dream is every animal lover’s dream. I would positively love for someone to just give me a large, forested animal sanctuary (or its down payment so I could afford it), even if it came with baggage. After winning possession of a monkey from a woman desperate to even be granted the right to visit her pet, Story Book wants to have their cake, eat it, and rent out an amusement park too. They believe that because they’ve ‘rescued’ a few monkeys, they are angelic enough to deserve a partial freebee of a near million dollar property, far more than what they need for the amount of animals they possess. Even though what they have now is 100% provided by donations as well.


“We are also developing a business plan for the new site that will generate social enterprise revenue for the sanctuary, allowing us to be self-sustainable.”

It sounds like this new opportunity will not only allow the ‘volunteers’ to thrive, but also obtain substantial economic benefit with a giant facility to operate in. This is just one reason sanctuaries gain so much momentum over humble little exotic pet owners who fund their animals themselves, and typically don’t receive free financial assistance. What a great opportunity for the sanctuaries to brag about how much more large and luxurious their facilities are compared to ours!

What many ‘non-animal people’ don’t realize is that working with animals is more than a privilege, it is a luxury. I wouldn’t hesitate to do this work for free and accept ‘unwanted’ exotic animals if I had the room. And if someone would give me the animal and the room for free, I would be on cloud 9. Essentially to my brain, asking for this is like asking the public for a mansion because you’ve adopted a child.

When you acquire animals for any reason you are responsible for your own bills. If any of the monkey’s cages at Story Book are inadequate, they should stop obtaining animals, and this especially applies to animals that have financially-well off owners clawing down the door to get them back.

The only consolation is that it looks like they won’t reach their goal (they’ve accumulated around $11,000 so far), at the time of this writing, but let’s hope that some absurdly rich donator doesn’t become a Christmas angel for this greedy and entitled primate sanctuary.
Posted by Melissa at 1:08 AM