What do you get when you cross unparalleled ignorance with a harmless, tiny (but somewhat long) milksnake? In about 99.9% of cases, you get a savagely smushed snake. My first encounter with completely unjustified violence against these legless reptiles occurred when I was so young that my memory of it has a dream-like haze. My grandfather told me his neighbor found and killed a small snake that I was quite excited to see.

I ran across the street to find what I’m now sure was a little harmless garter snake, because of how common they are in this region; flies circling its fragile body and blood seeping out of various ends. As young, naïve, and understandably ignorant to the world that I was at such a young age, a light bulb of common sense went off in my head when I witnessed this scene. Why did he kill it? It wasn’t harming anyone; it was just merely existing, visiting the yard like a mere hummingbird. I was very upset, and had a permanent low opinion of my grandfather’s neighbor (also a family friend) from then on. 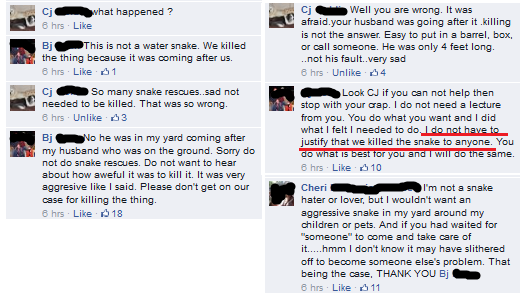 So unfortunately, the ‘kill snake’ mentality always prevails because of basic fear, likely stemming from the fact that some snakes are venomous, 10-15% of the population of the world’s species that is. Had the snake been venomous, this would have been even more upsetting, considering that New Hampshire’s only venomous snake, the timber rattlesnake, is highly endangered and protected by law.

But, regardless of a threatened status, people absolutely do have the right to defend themselves against animals that threaten harm to them. In certain states where rattle snakes are a problem, some cases can warrant lethal action to protect pets and family. There is practically never such a situation in a state like New Hampshire that justifies killing any snake you come across, assuming it to be ‘aggressive’. The best course of action for snake-o-phobes is to simply walk away, out of the path of the simple-minded animal retreating for its life. Snakes do not “go after” people, as BJ’s ignorant affiliates appear to believe. 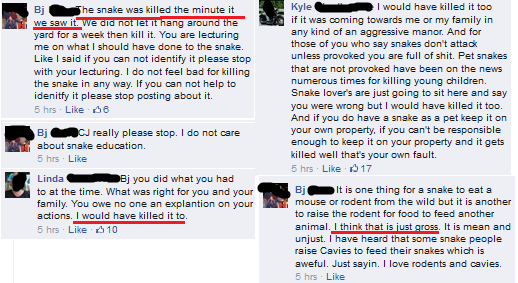 “And for those of you who say snakes don't attack unless provoked you are full of shit. Pet snakes that are not provoked have been on the news numerous times for killing young children.”

Such an astounding display of ignorance compares the largest snakes in the world to field-mice, earthworm, and lizard-feeding milk snakes.Should a milk snake ever defy its evolutionary evolved behavior sense and try to take down a human, that human might get a slight nip that bleeds blood in the amount of a pinpoint.

The most important aspect of the stupidity is displayed in this remark:

“Kelly if it was one of yours [pet snake] and it was in my yard oh well. Karma will bite your ass for having living things you should not have.”


That’s right. The person who declares they couldn’t care less about violently smashing a harmless snake is taking the moral high ground in declaring that exotic pet owners are terrible people (and also declaring it is “mean and unjust” to raise rodents to feed them, as if raising cows and chickens to feed dogs, cats and ourselves isn’t the exact same thing). How horrible it is for people to care for, and as a consequence have a superior understanding of, reptiles that are feared of by most.

This is a great example of the positive influence that herp keeping has for wildlife. Perhaps many snakes have been spared this fate after their would-be assailant was educated by a friend that keeps reptiles. It is rather unsurprising that ignorance about exotic pet owners often is accompanied with ignorance about animals in general. This can sometimes have lethal consequences for them. 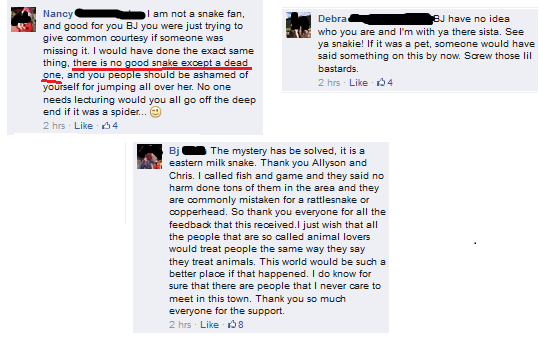 This was BJ’s closing statement in celebrating telling off the snake’s supporters:

“I just wish that all the people that are so called animal lovers would treat people the same way they say they treat animals.”


Clearly BJ does not carry that philosophy; otherwise s/he would be in jail for smashing any ‘suspicious-looking’ person to death for walking towards them and asking questions later.
Posted by Melissa at 12:56 PM